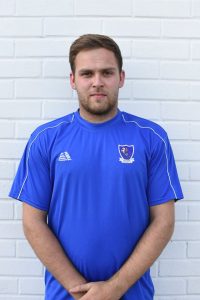 Photo: Lewis Bruce is one of four players hoping to make their competitive debut at AFC Mansfield

HALL Road Rangers boss Dave Ricardo believes his side will be a test for anyone ahead of their Emirates FA Cup trip to AFC Mansfield tomorrow (3pm).

Ricardo believes his side have more then enough though to be competitive as they take the step up.

“We have a strong athletic group of players who I believe in some cases have got better from last season with the penny dropping as soon as we kicked back off.” Ricardo admitted during the week.

“Mansfield will be a tough place to go, and after knowing Rudy Funk (AFC Mansfield boss) for many years, I know he will have an experienced side playing 442 with everyone understanding their role.”

Hall Road will face a tough start to their league campaign as four of their first five fixtures are away from Haworth Park.

Their only home match in this period will come against the much fancied Bridlington Town.

Ricardo admits though his side will fear nobody due to the winning mentality surrounding the club following last season’s title win.

“We will be a test for anyone however and we have the knowledge that we have only lost one game so far in 2017 and come into this new league as champions.

This shows that we know how to win games when the going gets tough which at times it will this year.” the Rangers boss added.

Rangers may in fact look at AFC Mansfield as a target to emulate, but remain quietly confident themselves they can do even better.

Following ‘The Bulls’ promotion two years ago they went on to record a creditable 7th place finish in their first season in the NCEL Premier Division.

Rangers will have Louis Bruce and Jack Griffin available however as both look set to make their competitive debuts as will Harry Fox and Matty Crane.

Rangers themselves have no injury worries but will be without Gareth Owen who is suspended following his red card on the final day of last season at Campion.

The winners of this tie will not only receive a welcome £1,500 in prize money, but will also face either Retford United or Leicestershire based side Quorn in the next round on August 19