PHOTO: Gareth Owen is amongst a trio of players set to return and will line up for the visit of his old club tomorrow 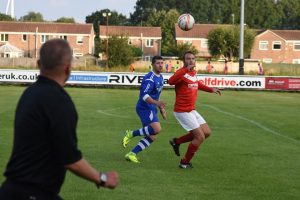 HALL Road Rangers will be boosted by the return of skipper Phil Dobson whilst Gareth Owen and Jack Griffin also look set to return when the much fancied Bridlington Town visit Haworth Park, to kick off the new league season.

Rangers were unfortunate to taste defeat in last week’s FA Cup tie at AFC Mansfield, conceding a late winner after Josh Batty had cancelled out Ollie Fearon’s opener for the hosts.

They showed however they are more then capable of competing at this new level as they matched a side that finished 7th in the division last term for an hour, after a sluggish start.

Hall Road boss Dave Ricardo could not fault his players efforts at AFC Mansfield but admitted his side need to raise their game a little more for the NCEL First Division champions to compete consistently week in and week out in the Premier Division.

Ricardo said the following after the Mansfield trip-:

“The lads know they have to raise their game to another level.

Although their work-rate can never be questioned, we just need to raise our game that extra 10% from one to eleven.

They were some solid performances last week and I don’t believe we deserved to get beat, especially in the manner we did.”

Rangers were without Dobson (unavailable) and Owen (suspended) as well as Jack Griffin, who’s international clearance from his time in America had not been received deeming him ineligible.

The trio all look set to return however for the visit of Curtis Woodhouse’s, Bridlington Town, with Owen and Dobson lining up against former clubs.

Also looking to be involved for Rangers against their former club are Conner Harman and James Whittingham, whilst Jamie Forrester could line up for the Seasiders, after the midfielder had a spell at Haworth Park early last season.

Rangers were again left frustrated on Wednesday night when their scheduled curtain raiser at Bottesford Town fell victim to the deluge of rain which battered the country 24 hours earlier.

This time round they can likely expect a hard-working Bridlington Town side with an eye for goal and a manager which has set his team a target of winning the NCEL Premier Division title this season after a strong showing in the second half of last season.

Brett Agnew and Jake Day are expected to spear-head their attack after both netted in their FA Cup win against Billingham Synthonia last Saturday.

They will however definitely be without Nicky McNamara who ruptured his achilles in last week’s win.