A two-minute Brett Agnew brace saw Bridlington Town come from behind to beat Hall Road Rangers 2-1 in their opening game of the season at Haworth Park.

An off-the-ball offence between Josh Batty and Andy Norfolk saw the Rangers striker sent off after 13 minutes, making the afternoon a whole lot harder for Dave Ricardo’s side.

Chris Spinks put Hall Road ahead shortly after the restart, but two goals by Agnew either side of the hour mark won it for Town.

Former North Ferriby defender Louis Bruce made his competitive debut for the club, as did Jack Griffin who joined the club after a spell playing in the USA.

On a lively afternoon, it was Rangers who had the real first chance, with a low Chris Spinks cross finding its way across the face of goal, but nobody in blue could find their way to the ball to tap it home.

Batty’s sending off (below) came after an elbow to the face of Bridlington captain Andy Norfolk, which made the contest a whole lot harder for the hosts. Norfolk was cautioned following his role in the incident. 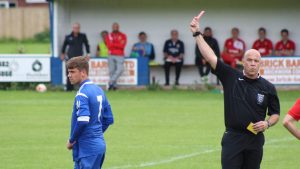 A fantastic save from Phil Dobson low to his right kept the scores level on the 20 minute mark, Bridlington’s best effort of the half.

Rangers had a penalty appeal for handball turned down shortly after the break, but just two minutes later, Chris Spinks fired them ahead.

A powerful effort was parried by Town keeper James Hitchcock, but he simply didn’t do enough to keep the ball out of the net with the ball eventually finding it’s way over the line.

But Hall Road’s lead would only last a matter of minutes, with a strong strike by Brett Agnew firing Bridlington level at the other end.

The goal gave the well-supported visitors momentum and they began to turn the screw.

Their pressure paid off as Agnew bagged his second just two minutes later. 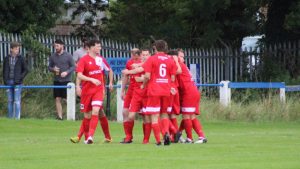 PHOTO: Bridlington celebrate nudging ahead through Brett Agnew’s second of the afternoon

A rocket of a shot by Jack Griffin travelled wide with only minutes left, and that was Ranger’s best chance of levelling the scores in the closing stages.