BILL Gill has this morning revealed his disappointment at losing to Rainworth MW last night despite creating the more chances, but the Rangers boss again paid homage to his players effort. 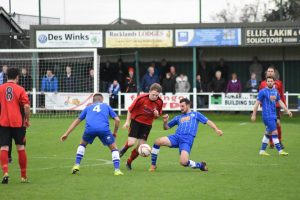 Hall Road found home keeper Ben Townsend in inspired form as they failed to find a way past, in response to goals from Rainworth strike pair Nathan Modest and Tomas Poole.

Fraser Hansen had two efforts saved, whilst Sam O’Malley and Gareth Owen were also denied on the evening as Rangers were hit twice on the break as they returned home from their 160 mile round trip empty handed.

“It was a disappointing result obviously, however the fact we were so dominant in large periods of the game was satisfying, I cannot knock the lads tonight as they really put a shift in and retained possession excellently.
As we know at this level though, you don’t get points for doing things well you get them by scoring goals and Rainworth literally had two chances and scored two goals so credit to them.” Gill commented.
An already tough looking fixture was made tougher by the distance Rangers had to travel in midweek to fulfill the fixture, this was highlighted by the fact a two and a quarter hour journey from Hull for the kit, meant the kick off had to be delayed by fifteen minutes as Hall Road’s, pre-match preparations were dealt a blow.
Gill however refused to use this as an excuse for the result but felt his players were let down.
“The game for me was lost even before kick off.
The lads didn’t get a warm up and team preparations and tactics went out the window due to the kit and training gear arriving minutes before kick off.
We offer no excuses, but as a management team we cannot afford for these things to happen as we need to give the lads the best chance possible, and last night we let them down.”
By Hall Road Rangers| 2017-11-29T11:05:10+00:00 November 29th, 2017|News|0 Comments