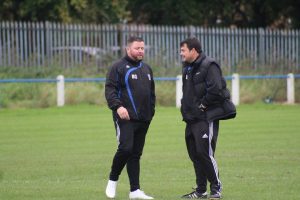 PHOTO: Bill Gill (left) was full of praise for all aspects of the club following Rangers win at Ashington, yesterday afternoon

HALL Road Rangers manager Bill Gill paid homage to the entire club, as they progressed into the second round of the FA Vase for the second year running.

First half goals from Fraser Hansen and Josh Batty saw a high energy and brave performance rewarded with a 2-1 victory in the north-eastern reaches of the country, a performance which left Gill ecstatic post match.

Gill was also grateful to the non-playing staff at the club and felt it was a real team effort when he said:-

“I was so proud of all the boys yesterday and am grateful to the management.

That’s not to mention the chairman and the travelling committee and press.

It was a group effort from everyone and we now look forward to the draw for the next round.

I also want to thank the driver Tony Dickens for getting the lads there and back safely.”

Gill, alongside assistant Andrew Watts have now overseen the team go on a four match unbeaten run in all competitions, winning three and drawing the other.

He did admit though not knowing too much about their opponents, but praised his team’s fighting spirit and willingness to roll their sleeves up and work hard for each other, a trait which has become synonymous with Hall Road over the past fifteen months.

He added “Today was our stiffest test to date facing a well established club in the north east.

However like us, they also didn’t know much about us either and right from the off we showed no respect to our opponents getting right in their faces playing through the thirds quickly, and been very direct in the final third.”

After a fairly even start as both sides settled at a similar rate, Fraser Hansen opened the scoring on just eight minutes, superbly bringing down a floated diagonal cross-field pass, gliding past a defender before firing his effort on target, and seeing the effort trickle through the hands of the keeper.

Gill did feel the reward of the opening goal came a little earlier then hoped but was generally pleased with how his side kept up the pace for the full game.

“This paid off (the direct play) with our first goal which I thought was to early in the game if I’m honest.

However we maintained the same tempo and then they got a lucky break for their goal with a scuff from around six yards.

After this we controlled and dictated the game throughout, with lots of chances and hitting the woodwork twice.

Our forwards led the line well and set the tempo for the full squad.”

Following an Ashington equaliser eight minutes after the opener it was left to Josh Batty to net the eventual winner ten minutes before the break.

The striker who ran his socks off all afternoon, pounced on a rebound after his original effort from inside the box was parried by the keeper.

The draw for the next stage of the FA Vase takes place at 1pm on Monday afternoon.