Home/News/Rangers look to ‘thrive’ at league leaders
Previous Next 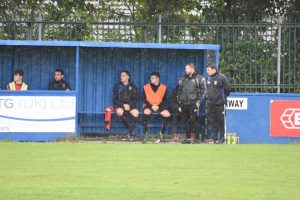 As Rangers season reaches the halfway point tomorrow they can be extremely satisfied with how they have adapted to the step-up in quality since winning the NCEL First Division title in April.

Gill and assistant Andrew Watts take their team to where the season started in an FA Cup Preliminary Round tie in early August and the Rangers boss admits the defeat that day still lives in the memory and is of the belief his players can use that as a positive.

“These are the games you look forward to as a player and also as management.

We travel to a side top of the league, and it is an exciting task and one the lads normally thrive on, this has shown on numerous occasions already this season and in some of our results.

We was unlucky in the FA Cup fixture last time we travelled to Mansfield, especially losing to the last kick of the game, and this still gets talked about even now, some four months later, so as a club we will be giving everything to try and get one back on our hosts, however we know it will be a tough game against a team in great form and in winning ways.”

Three weeks have now passed since Hall Road were last in action when they went down 2-0 at Rainworth MW and the break in game action has allowed the Rangers boss to see his concerning injury woes ease which threatened to spiral out of control at one point.

Gill did admit though that despite the return of the likes of leading scorer Chris Spinks, midfielder Jack Griffin and last season’s Young Player of the Year James Piercy his side have now been decimated by suspensions, and this is something his squad will have to cope with.

“We travel light on Saturday, as we have had some player suspensions all come through at once which was unexpected and also player holidays.

We haven’t used this excuse all season though and we won’t start here.

We have a young hungry squad with players looking for an opportunity every week, and this is an ideal game for those players to step up and prove themselves.”

With AFC Mansfield’s, Forest Town Stadium pictured under a blanket of snow on Tuesday evening, more encouraging news was released last night, as with the promise of an improved forecast in the area over the next 48 hours hope has been restored that tomorrow’s game will go ahead.