As the season nears it’s halfway point, keen golfer Sam Belcher took some time out and took a swing at the questions in the latest Rangers Revealer.

So did Sam find the fairway with his answers, or will he be forever banished to the water hazard after giving his opinions on his team-mates? 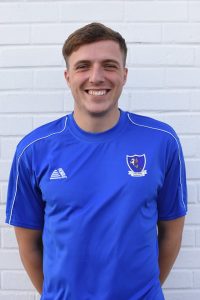 Q1. First up, what’s your most embarrassing moment at any level of football you’ve played?

“I’m glad to say I haven’t had many embarrassing moments, but if I had to go with one it would have to be me trying to play 5 aside.

The pitch isn’t long enough and can’t put the ball in areas.”

Q2. What is your proudest achievement within football to date?

“My proudest achievement is a very easy answer; it has to be winning the league last year with a great set of lads, that is simply a memory I won’t ever forget.”

Q3. Who is the best player you have ever played in the same team with and why?

“Ash Dexter is top of the list for me.

He captained our league winning team, he is a brilliant leader, dominant (tank) and if he only kept off the medium meat feast pizzas with chips, and the cheesy Doritos he could have played higher.

He is someone however who I look up too and I’m proud to have him as a mate.”

PHOTO: Ash Dexter celebrates scoring last term, has been given the accolade of best player Belcher has ever played alongside

Q4. What were your first impressions when you joined the club?

“If I’m being honest the club had a bit of a reputation, as being an average club with a lack of desire.

The players, and the off field team which are here now though have done an outstanding job to get the club where it is, and in my eyes we are the best team around in this area.”

Q5. Now to dish the dirt on some of your team-mates, who never buys a round in the bar after a game?

“Benno never buys a round, he’s got very short pockets and often will always try to persuade the lads that they owe him one from a night out that probably never happened!

James Piercy (Romeo) will often get a flyer too and not stick around as he has a date night every night these days.”

Q6. Who is the most boring person at the club?

“Roy Cropper (Brucey) can put a glass eye to sleep.

Although a conversation between him and me wouldn’t be exciting.

A conversation between Gareth Owen and Fraser Hansen would be one for the record books, both share one brain cell!”

PHOTO: Louis Bruce’s long throw maybe a weapon, however his conversation apparently is not.

Q7. Who is the best for banter in the dressing room?

“Josh Batty is a funny boy.

Some of his stories can’t be released for the safety of Josh and half of Scunthorpe.

The story though where he pranked his own mum into thinking she won the post code lottery is golden.”

Q8. Who takes the longest in the shower?

“James Whittingham takes a very long time in the shower.

We don’t know why either though, as he can’t be that muddy when he sits on the bench.”

Q9. Who has the worst dress sense at the club?

I get called grandad because I like a good pair of slippers.

Gaz Owen has bought the full Primark collection twice over, but Benno has to be up there too.

PHOTO: Hands up if you own the entire stock of Primark… Gaz Owen who has an eye for a bargain

Q10. Who is the biggest moaner at the club?

“Gareth Owen is by far the biggest moaner, he could argue with his own shadow, and if it hasn’t got a yellow sticker on it, he won’t buy it!”