THE last twelve months has seen the club take strides both on and off the pitch, and more success is hoped to follow in 2018 as the club continue to show the ambition which could potentially see the club become the strongest force in local non-league football.

It’s a huge transition from a club which in all honesty, and for whatever reason in terms of its first team, was previously content with existing, a stigma they are now starting to shake under it’s ambitious committee led by Darren Sunley and Lee Myers (pictured right), since its move to Haworth Park nearly three years ago.

The year started for Rangers with a hope from the outsiders who follow the club’s results, yet from inside the club their was a staunch belief amongst the players, staff and supporters that promotion could be achieved, which would see a return to the NCEL Premier Division for the first time in four years.

A remarkable turnaround, considering the club had finished in 17th the previous season.

2017 could not have got off to a better start, as due to other cup commitments Rangers were always playing catch up in terms of fixtures and found themselves hovering around the play-offs.

Rangers went on a run which saw them unbeaten in the next eleven fixtures.

Impressive wins at Hallam and Glasshoughton Welfare, were particular highlights, as was home wins against Penistone Church and Grimsby Borough as well as a 0-0 draw at AFC Emley.

A heavy reversal at Pontefract Collieries which brought that run of eleven games to a shuddering halt in March actually inspired Hall Road to go onto greater things.

With the twists and turns that a title race can bring, it went down to the wire, and it was the Haworth Park outfit that would prevail, showing nerves of steel whilst under immense pressure.

A win at Rossington in the penultimate game of the season set up a final nerve shredding day at Campion.

The rest as they say is history as ten-man Hall Road, on the day had Josh Batty to thank, with a first half brace to spark amazing scenes at full-time which were admirably honoured by our hosts on the day, providing a guard of honour at full-time, as Rangers triumphant players returned to the dressing room.

Not only promotion had become a reality, but gaining that through winning the league title was truly special.

I remember been stood in the bar at Campion at full-time, looking around and not only seeing the joy on those faces who had worked so hard to make it happen, but feeling each person, from player, to staff, and supporters had contributed at some point of the season to make the moment possible – a real team effort.

You had Jack Binns 87th minute winner at home to Penistone Church and a Phil Dobson penalty save in the same game.

There was also Ash Dexter’s mammoth contribution which saw him net ten times through the season from centre-half and quite rightly saw him walk away with individual honours at the club’s presentation evening.

Who could also detract from the full Rangers rearguard who with Phil Dobson in goal, and contributions from Thibault Granger, had amassed seventeen clean sheets in the league the joint highest within the division.

With the likes of Tom Bennett, Jake Vernon, Danny Norton and Conner Harman in the midfield engine room as well as seventeen goals from Joe Cooper these provided the team with a platform from arguably the strongest midfield in the division.

Plaudits could also be lauded at the front men, Josh Batty had stepped up for the side since joining from Winterton in October 2016 and there can be no underestimating the impact made by Chris Spinks who’s 26 goals were vital.

As the players went their inevitable seperate ways in the summer, there was a quiet optimism when they returned to Haworth Park in late June for pre-season training.

Rangers managed to keep the core of the squad which helped them win their first ever NCEL First Division title.

Arguably their biggest loss though came through retirement of inspirational skipper Ash Dexter.

Although not one for personal spotlight as a true captain, he was always quick to praise the team effort instead of his own contribution, however his departure would prove a difficult obstacle to overcome.

They were also moves for Jake Vernon and Thibault Granger who both left to complete their university studies closer to home, whilst Joe Cooper would also later move on.

Rangers were linked with a whole host of playing talent, the first to join though was former Ferriby defender Louis Bruce, and Grimsby Town midfielder Jack Griffin.

Also joining was former Harrogate Railway wide-man Fraser Hansen and they were joined by strikers Matty Crane and Danny Chambers.

Pre-season in terms of results and performances was just what was needed to help everybody settle back down again and focus.

In their opening five games Rangers tasted defeat just once, and recorded back to back wins over Harrogate Railway and Barton Town in that time before a defeat to current leaders AFC Mansfield (0-1) at Haworth Park. 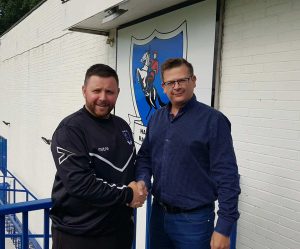 It was then decided to change the management following Rangers win over Gedling MW in the FA Vase.

Dave Ricardo was replaced by Bill Gill, whilst Andy Watts, another integral member of the success from the season before was promoted to assistant coach.

Gill had previously served time with Notts County and had worked alongside manager’s such as Martin Allen and Phil Parkinson and is a student of the game that brings a calmness to the dugout, whilst his new assistant Watts is also clearly passionate about the club and has worked his way from being reserve team coach into the first team’s management structure.

On the appointment Gill was delighted to continue his role with the players who he had forged an excellent relationship with, said the following:-

“So I had decided to commit to two years as first team manager at Hall Road Rangers, mainly because of the people around and involved at the club and obviously the players who I’ve attached myself too over the last couple of years.”

The club have merited my commitment, and have confirmed they will support me through my A license completion over the next two seasons.”

From here the club have set about improving relations amongst all of its teams, something which is safe to say was probably non-existent previously.

This new formula appears to be working too, as the likes of Alex Stock in particular have come into the side and acquitted themselves superbly whilst James Tullett and Josh Vickers have also had opportunities at first team level.

On the new structure and the hopes for its successful implementation Gill added:

“Short term my aim was to put in place a slide up, slide down system from our Under 19s to the reserves and then to first team, whilst also starting up the 19s alliance league mid week again.

This target has now been met and I will continue to monitor and develop these age groups so we have local club players having the opportunity to get first team experience.
My other short term aim is to capture all local Hull based talent and embrace them in the clubs philosophy and become part of our long term aims.

Our full youth system is booming at the moment from under 7’s to 14’s and we have some fantastic people on board coaching these teams, which is all over looked by Paul Richardson who is another valuable member of the club.

Paul does an excellent job looking after all the welfare and qualification needs, but ultimately makes sure all young players enjoy their football and there’s a place for everyone. ” Gill continued

These things take time though and immediately following Gill’s appointment a last minute defeat at Maltby Main handed Rangers a defeat, this despite having spells where they should have laid claim to the points.

A 2-2 draw at Bottesford Town saw Tom Bennett grab a last gasp point with his first goal in almost two years, before a professional display followed as they saw off a spirited Skegness Town, two division’s their inferior to reach the FA Vase First Round for the second year running.

Then came one of Rangers biggest moment of the 2017-2018 season so far when they travelled to, and crushed Handsworth Parramore thanks largely to a Chambers hat-trick and Chris Spinks goal, winning 4-1.

Two defeats followed which still saw Rangers in mid-table before the returns of Joe Cooper and Jake Vernon looked to galvanise the club further.

This then saw Hall Road go seven unbeaten in all competitions, an excellent FA Vase win at Ashington in the North East as well as a nervy evening at home to Reckitts saw progression in the Senior Cup also.

A point at Pickering Town was followed by a 4-0 thrashing of Worksop Town, which had seen Rangers home and dry by half-time, which saw us climb to tenth, our highest position in eight years.

A superb first half display at home to Pontefract saw Rangers 2-0 up at the break in the FA Vase, but it was not enough as the free-scoring Colls roared back, equalising deep in injury time before going on to end Rangers FA Vase adventures for another year in extra time.

The manner of the Pontefract defeat hung over the club for the next ten days, as a heavy schedule also played its part as a defeat to Liversedge followed three days later.

A home hammering by Athersley Recreation compounded a miserable fortnight, however some respite was provided with an away win at Thackley, before another defeat which saw Rangers leave empty handed from a 160 mile round trip in midweek at Rainworth.

The year ended with a wet December, home games with Pontefract Collieries and Parkgate fell victim to the weather, and a valiant effort at AFC Mansfield saw Hall Road undone by two defensive errors and lapses in concentration.

In a 2017 which provided the club with one of its most successful in it’s near 60 year history, the year ended with a whimper as despite dominating at home to Barton Town they failed to convert some glorious chances and were punished in the second half, going down 0-2.

So as the calendar year draws to a close, reflection becomes inevitable.

There have been some incredible highs, and there have also been some lows.

On the whole however the positives far outweigh the bad, and with a fresh and re-invigorated side we will look to see the first team climb the table again in the new year starting with the visit of Bottesford Town to Haworth Park on January 6.

There is some excellent work been carried out at the club as those working behind the scenes look to make Hall Road Rangers the club we all know it can be. 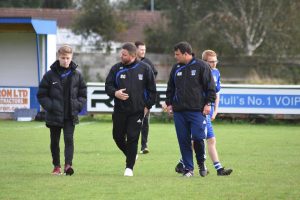 “The long term aim is to have a flow of regular reserve team players around the first team and also playing if their ready in their development.

We also wish to have the reserves win the Humber Premier First Division and gain promotion into the Premier Division.

In terms of the first team, we are aiming to stabilise the club in the NCEL Premier Division and try to make us a top six team next season with eventually a view to reaching the Evostik league structure and having our Reserves in the NCEL.

It sounds ambitious, but everyone at the club including its committee, the players and management staff all support these plans and we will be working over the next three seasons to achieve these.

A huge thanks from me also to everyone at the club including our bar and kitchen staff, all press officers, committee and fans, here’s to a very positive and successful few years.”