With the postponement of Hall Road’s game with Pontefract Collieries last night, there was no better opportunity to catch up with last season’s Young Player of the Year, James Piercy for the latest Rangers Revealer.

So with a mention to Haworth Park’s answer to P Diddy here is what the young centre-back had to say about his current crop of team-mates. 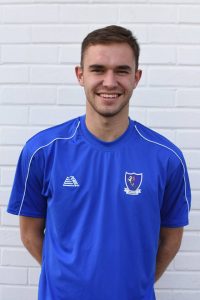 Q1: What has been your most embarassing moment in football to date?

My most embarrassing moment up to now is probably playing last season at Yorkshire Amateur.

We had been on a real good run going into the game, the conditions weren’t great, but in the last minute drawing 0-0 at a tough place to go, I headed one in the top corner of my own net and we ended up losing 1-0, the worst bit came though when it was spread all over the local paper.

Q2: And what has been your proudest football achievement to date?

It was definitely winning the league last year with Hall Road.

For what we did, and then went on to achieve as a group, in just under a year from us all coming together, to then go and win the league was class.

Q3: Who are the best players you have played with so far in your career?

I’ve played in a few positions, mainly both in central midfield and at centre back.

I’ve got to say though its between both Danny Clarke and Ash Dexter are by far the best players I’ve ever played with.

Both are great leaders and excellent role models in football.

The pair of them were also great mentors for me as a young lad, and have helped me a lot in my own game

Q4: What were your first thoughts and impressions when you joined the club?

If I’m honest, and some other lads may feel the same my first impressions when I joined the club were not the best.

I had played against Hall Road with Hull United the season before and I remember the pitch was basically a mud bath and there wasn’t a positive mentality about the team.

Since I’ve joined though and the success we have enjoyed it has changed vastly, it’s now a forward thinking club that has aspirations of going further.

Q5: Who has been the biggest influence on your career so far?

“There have been quite a lot of influences on my career so far to tell the truth.

The first that springs to mind is my dad (John Piercy, now in charge of the Reserves) who has been involved with my footballing from a very young age and still now comes to watch me every week when he can.

I’ve also had some excellent coaches like Dave Ricardo and current coach Bill Gill have both had a massive impact on me.

Q6: Who at the club goes missing when it comes to buying a round?

Benno never buys a round and is simply a cheapskate.

It’s got so bad that he now even asks to borrow shoes on a night out!

PHOTO: Rangers skipper Tom Bennett strikes out again as the least likely to buy a drink. Three out of three for the captain.

Q7: Who is the most boring and who is the one to avoid?

That’s easy, the most boring is Brucey a lot of the lads call him Roy Cropper

Q8: Who is the best for banter in changing room?

Another easy one, I’ll have to go for Josh Batty

Q9: Who takes the longest in the shower?

Witty takes the longest in the shower definitely

Q10: Who is the biggest fashion disaster at the club?

Simply for his P Diddy coat, sorry Witty but it’s you again

Q11: Who loves a good whinge at the club?

Now that he is back with us, I can include him, it’s Jack Griffin but its close as alongside Gaz Owen they are both the biggest moaners at the club.