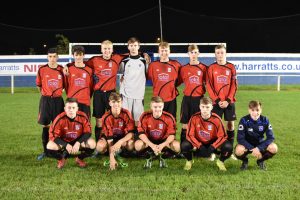 PHOTO: The next generation of Hall Road Rangers players got off to the perfect start at Pontefract last night

Hall Road Rangers Under 19s re-entered the Northern Alliance Football League with a bang on Thursday evening as they travelled to Pontefract Collieries, rattling eight goals past their West Yorkshire counterparts.

Under the guidance of Manager Nick Daniels the squad, comprised of some of Rangers youngest and most talented footballers, ran out 8-1 winners on the night at the Harratt’s Nissan Stadium.
The league, intended to showcase some of the regions brightest talents, is played each week under the floodlights of their parent club and gives a fantastic chance for young footballers to get the experience of playing on a grander scale.
Back in the league after a seasons absence it took rangers less than a minute to open their scoring account as Archie Brown, cooly slotted home from the penalty spot after an early blunder by the Pontefract defence.

Adam Palmer grabbed Rangers second on 20 minutes before Reggie Waud got the first of a brace on the stroke of half time to give his side a three-goal advantage at the interval.
Weathering the Rangers attack was too much for one young Pontefract player who frustrated by the pressure, threw a headbutt which was seen by the referee as the teams awaited a free kick and he was correctly dismissed for his misdemeanours.

After been reduced to ten men Pontefract remained undeterred, and they came at Rangers straight from the start of the second period.

Despite some tenacious saves from Rangers keeper Joe Piercy, Pontefract got their consolation on 52 minutes to reduce the arrears to 3-1.

Their hopes of an unlikely comeback didn’t last long though, as with a renewed sense of purpose Dillon Taylor got Rangers 4th.

Reggie Waud grabbed his second and Rangers’ fifth on 71 minutes before Tom Cracknell got in on the action with the first of his brace on 74 minutes.

Josh Vickers opened his scoring tally for Rangers on 81 minutes before Cracknell grabbed his second and Rangers’ eighth on 89 minutes to round off a brilliant display.

With Rangers being a late entry to the league they will now have to rearrange some missed fixtures.

The Under 19s Rangers next game is expected to be within the week.